Walpurgis night in Berlin: spontaneous demonstration, 5 arsons on cars, color and stoned against the immigration office 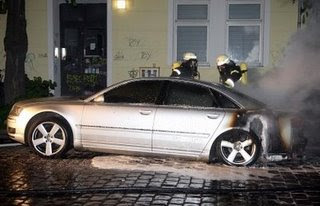 In the time between 0.55am and 3.15am five arsons attack have been undertaken in the districts of Mitte, Pankow and Friedrichshain – Kreuzberg.
Thanks to active passer byers, a sixth one could be prevented in Lichtenberg.

Color and stones against the immigration office

Around 6am, unknown person threw stones and color against the immigration office located in the Friedrich – Krause – str. in Mitte, damaging five windows.