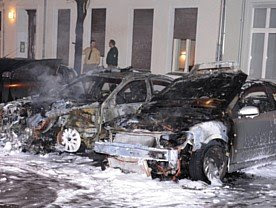 Once again in Berlin luxuary cars are set on fire. According to police sources a Mercedes was burnt this morning in Gleimstraße, Prenzlauer Berg. The front part of the car was damaged. Half an hour later another Mercedes was set alight in Ueckermünder Strasse, in the same area. Six other cars were set on fire by leaking burning fuel. Some plastic material was also damaged on nearby houses. The fire brigade put out the flames. State Security investigates both cases. By Friday there would have been 30 arson attacks on cars this year. 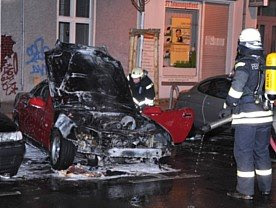