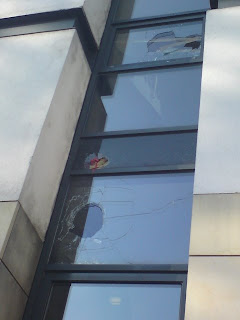 In the night of the 18th some windows of the police station in Dresden-Neustadt as well as two police cars parking in front of it were smashed. The fasade was decorated with paint bombs.

The activists declared their solidarity with the squatters of the Topf & Sons area in Erfurt, this is how they protested against the eviction.

No day without autonomous centre in Erfurt, Dresden and elsewhere!
Source: indymedia

Dresden: Four unknown persons created some thousand Euros worth of damage at the police station Dresden-Nord, Neustadt. Around 0:40 the culprits stormed in front of the police station on the backyard of Bautzener Str. While one was throwing three paint bombs at the fasade, his accomplices smashed two police cars. They destroyed the rear and front windows of the two VW Golf, one outside mirror and a flashing blue light. In the stairwell two windows were damaged as well.

„The attack didn't even take 30 seconds“ said spokesperson of the police Marko Laske. The officers could watch the attack on the monitor, but by the time they came out, the culprits were gone already. The mitive of the obviously planned attack is unclear. (lex.)