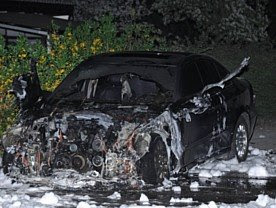 Shortly after midnight a Mercedes was on fire in Bulgarische Straße in Treptow. Three hours later passers-by reported a burning Audi in Rigaer Straße in Friedrichshain, said the police.

The fire brigade was ablöe to quickly extinguish the flames, nobody was hurt. Political police investigates.