3 branches of Kaisers are made better with paint. 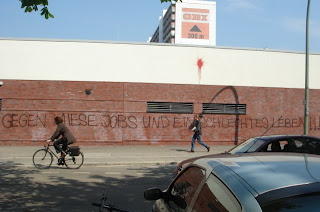 In the night between 16th and 17th April 3 branches of Kaisers supermarket were made better with spray and paint. The activists painted „Against miserable jobs and a bad life“, „Solidarity with Emmely“ and „1,30“ on the outside walls of the three branches. The protest is against the suspicious dismissal of Emmely, who was fired under the pretext of having stolen a deposit coupon worth at the most 1,30 euro. In reality her involvement in a strike for better working conditions is the reason for her dismissal. It is out of Emmely's concrete case that this action arises, against the exploitative way that capitalism is organised.
With the support of the Emmely Solidarity Committee Emmely has appealed against her dismissal, until now however judgement has been given in favour of the employer and the suspicious dismissal shown to be fair. The judgement is an expression of class justice and not acceptable. Emmely and the Solidarity Committee will continue with the legal process.
If justice becomes injustice then we can also do things differently. We will take care of Kaisers and rob their sleep as happened last night if Emmely is not reinstated and found to be right [...]
We don't doubt that union organisation is controlled through dismissals. The example of Emmely can lead to nothing more than acts of defiance which, in the future, will organise themselves better and more. They will take responsibility to take the reins by the hand and to self-determine how things will work.

We are having another rally outside Kaisers, this time in connection with migrants in Germany. This time we have left ourselves lots of time, the rally is registered from 1pm-7pm. There will be different sorts of music, speeches. We are not allowed to have a street party so bring your entertainments with you- coffee and cake for example. The Kaisers in question lies on a special local corner of Kreutzberg, the weather will be good- we know that- and it will be a nice saturday so we invite you to come along. The point of the rally is self evident- the ongoing scandal of Emmely's suspicious dismissal and the petty justification and the juridicial setup that accompanies it.
More infos: http://www.labournet.de/branchen/dienstleistung/eh/kaisers.html

Until the next time