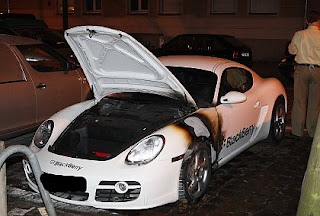 In the night of Good Friday another car was set on fire in Friedrichshain. Passers-by alarmed the fire brigade when they saw a burning Porsche on the sidewalk in Jungstraße. The firemen extinguished the flames. Police said, that as it is the case with the former arsons, the political police investigates. Thursday night three cars were burning in Friedrichshain. Because of the numerous attacks of leftist autonomous on cars and buildings, the Conservative Party CDU warned of increasing bursts of violence in the weeks before the 1st of May. This year already 70 cars went up in flames. Up to now the police could not arrest a single culprit. A reward of 10.000 Euro was offered.