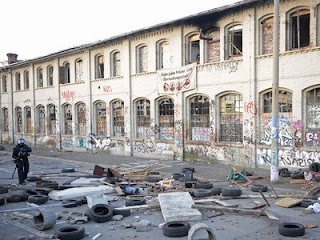 Following police reports two molotov cocktails were hauled onto the parking lot of the police station at 9:30 p.m. A civil police car was completely destroyed by that. As well there were 8 waste bins on firew in the city, which then set on fire private cars parked nearby. Through this a BMW in michaelisstr. was destroyed, in Furtmühlgasse a VW was completely destroyed by a burning wastepaper bin. At Juri-Gagarin-Ring the windows of a VW cracked because of the heat of a paper container nearby. In Greifswalderstr. a Honda was torched, also damaging a Mazda parking next to it. In the early morning hours 7 persons were arrested. The 6 men and 1 women are at tghe police station in Andreasstr. at the moment.

in the night of 18th-19th April 2009 three vehicles and 7 waste bins were set on fire. Already at 9:30 p.m. unknown culprits threw two molotov cocktails above a gate of the police station in Andreastr. 38, setting ablaze a civil police car. The car was completely destroyed by the fire.

At 0:00 a wastepaper container was set on fire by unknown persons in Schlütterstr. About 2 ½ hours later a paper bin was burning in Michaelisstr. A BMW parked directly next to it caught fire on its left side. The damage done is up to an estimated 5000 Euro.
At the same time a VW in Furtmühlgasse was destroyed nearly completely. Here as well a waste bin set on fire was causing the car to burn out, damage here reaches 15.000 Euro.
Through the heat wave of a burning container at Juri-Gagarin-Ring the window of an office cracked. Also parts of a VW were damaged. Damage: 3.000 Euro.
In the area of Auenstr./Albrechtstr. a waste bin was set on fire at 3:30. Few minutes later a paper container was burning in Iderhoffstr. Around 4 a.m. A container in Franckestr./Johannesmauer was set on fire by unknown persons.

At 5:50 police and fire brigade had to set out to Greifswalderstr. Unknown culprits had set fire to a Honda. A Mazda parked nearby also was damaged through the fire.
Criminal police runs investigations against seven persons, six men and one woman, which are under arrest.

The funeral march announced to go from Krämerbrücke to the former Topf & Sons area was stopped by a massive deployment of BFE and police (6 troop vans). After controlling identities and bags the police arrested two men. Accusations are violation of the gun control law and insult. The police argued as follows: „This is a normal police control, to prevent that more objects get squattedand to pull such groupings out of anonymity into visibility.“

Erfurt is not getting quiet and this is good. The press release of the Squat:

„People wounded during the eviction of the Topf & Sons area“

At the 16th of April police spokesperson Manfred Etzel declared in front of journalists that noone was injured during the eviction of the Topf & Söhne area. This is not true. At least five people in the sitting blockade were hurt by brutaly acting police. Amongst others the nose of a youg woman was broken, tweo people were hurt at the neck by the police and had to get medical treatment. More people suffered bruises and abrasions.
During the eviction people were hit oin the face. During the arrests people were kicked by police officers, pressing them to the floor while they were already chained. Those arrested were kept in a prison bus for up to six hours without food and water, to go to the toilet was also rejected. One asthmatic was not given her medication for 1 ½ hours. When people complained about the miserable conditions police officers simply turned up the music of the radios.
„The boldness of the police celebrating their peacefulness in public is just another punch into our faces“ said a participant of the blockade.

What happens in Erfurt right now makes us feel state power for real for the first time. Since the eviction there is sirens to be heard every few hours. At night police patrols even more. That small groups have theie identities controled became normality. At the same time not only the youth makes it clear that they care about free spaces. The show, all in their specific ways, that the will not accept the squat being taken away. They show that they are ready, depite the massive repressive measures and permanent controls, to get going and fight for a self-managed centre.