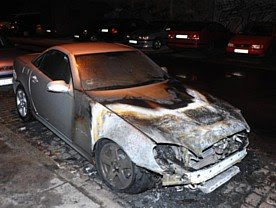 - A resident of Paul-Linke-Ufers in Kreutzberg noticed flames on a „Landrover Freelander“ at around 12.15, he was able to extinguish the fire himself with a blanket. The landrover was slightly damaged.

-At around 2am on Karpfenteichstrasse, Treptower residents heard a loud bang and shortly after saw a burning „Mercedes SLK“. The firebrigade put the fire out.
-At around 3.30am unknown persons set fire to a „Mercedes“ transporter by Treptower Park, opposite Karpfenteichstrasse. The transporter was completeyy burnt out. Through the effect of the heat five neighbouring cars were damaged. 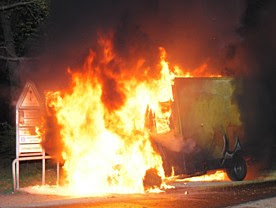 -At around 5.25am a passerby noticed two burning cars in Zolastrasse, Mitte. Unknown persons set fire to an „Audi S8“. The flames spread to a „Volvo“ parked next to the „Audi“. Both cars were burnt out.