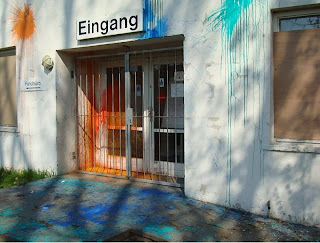 Easter time is colour egg time. Seemingly some of them were flying through the night of Easter Sunday in Erfurt. Town Clerk`s Office, Planning Department and the Police Station in Andreastraße was beaming in bright colours on Sunday morning.
There is some assumption that this has to do something with the developments of recent months in Erfurt. So Town Clerk`s Office and Police showed off implementing rigid regulations against groups of people they do not like to see in the Inner City. The aim was to expel people lacking a certain purchasing power (Punks, Homeless, etc.) from there. The attitude of the police in Erfurt is getting more and more harassing, especially if people are seen to belong to „the leftist spectrum“ and the squatters scene. In front of the squat police was insulting people. Moreover police became violent controlling paople on their way to the squat. These days police forces in Erfurt are obviously making efforts to criminalize the actions of the left scene and collct as much data as possible. For sure the continous patroling of Erfurt could not prevent the colour eggs from flying. Not everything can be prevented by „law and order“ and massive police presence.
Meanwhile the Planning Department was penetrating the squat in erfurt again and again with authoritarian prohibitions to use this and that, and turned into a whip in the confrontation around the squatted Topf and Sons area. 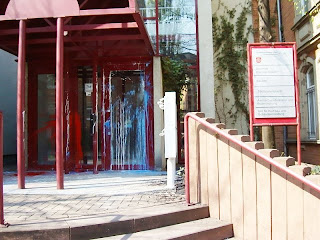 The sqatted Topf and Sons area faces immidiate eviction now. One of the next days will be Day X, which will hopefully get filled with creative and multiple actions.

We will all stay!