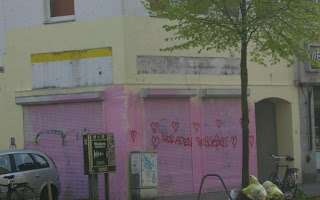 last week an action against the fascist shop „Sportfreund“ took place in Bremen. The shop was completely painted pink, red hearts and slogans were attached, the blind rendered useless with construction foam.
It was made clear that a shop marketing and selling right-wing lifestyle will not be accepted in the middle of bremen city centre. The shop had an important function as a meeting point for bremen Nazis, a lot of fascists moved into the neighbourhood recently. That the shop is an important place for the Bremen fascist scene was obvious again during an antifascist demonstration against the fascist shop, when about 10 Nazi (hools) and Hells Angels gathered in the shop to „protect“ it. The action was an symbolic act that is an integral part of a series of broad protests against the shop. It is not meant to be the end of actions!

Close down Nazi-shops!
Pink for all!