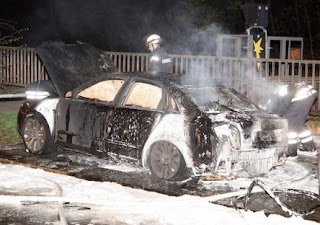 First inhabitants alarmed police and fire brigade at around 2 a.m. In Hochstrasse, as an „Audi“ parked there was on fire. As police officers reached the scene, the flames already jumped across to a „BMW“. Both vehicles were severely damaged. Nobody got hurt.

At 2.45 three cars were burning in Sprengelstrasse. First investigations lead to the assumption that unknown persons first set an „Audi“ on fire, which then spread to a „Renault“ and a „VW“. Additionally a Motorcycle „Honda“, a „Dixi“ toilet and a bicyvle were severely damaged. Human life was not under threat.

In boith cases state security of the police took over investigations.

Last night unknown perpetrators smeared slogans on the federal management building of Verdi in the Mitte district. Around 11.30 a patroulling security found nine slogans of various sizes at the fassade of the building at Paul-Tiede-Ufer. Stae security took over investigations.

The burning of supposedly stolen pallets and the building of hinderances lead to the deployment of police and fire brigade last night in the Mauerpark at Schwedter Sztrasse in Prenzlauer Berg.
A police patrol had realized that there were about 250 persons gathering in the Mauerpark the late evening. At about 11 p.m. they reported 120 persons at a fire near the „Atrium“. Some supposedly stolen euro pallets were filed up there and set on fire. Moreover the police saw barriers put on the middle road, presumably to block the access to the fire.
At 11.40 bottles were thrown on a civil police car patroulling the industrial park nearby, but failed to hit the vehicle. At this time about 100 police called for reinforcement arrived and took further measures. The fire brigade extinguished the pallets, the police evicted the park in direction Gleimstrasse and gave out banning orders. The operation was finished at 12.40 already.
Offeicers of the federal police arrested a 23 year old man red handed in Schwedter Stasse and handed him over to their colleagues of the provincial police. The man, presumably being under the influence of alcohol and drugs, had damaged four parked cars by throwing stones at them. As he just lifted another one he was overpowered by the police. The person arrested is already well known to the police to be a politically left motivated violent criminal. State security investigates.