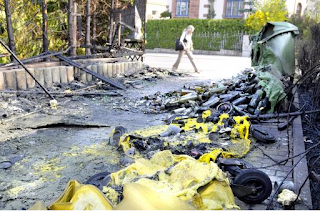 Today 40 dustbins were set on fire in different places, causing a damage of some 10.000 Euro. Fire brigades and police were completely overpeowered because of the major operation in Erfurt. The mayor is willing to negotiate with Gerberstraße. Addition to the article „Erfurt: squat evicted“ (...link...)

Article of TA of that day:

„In the whole area of Weimar City there has been attacks on reusable material containers. Starting in the morning, police and fire brigade deployed all day. Damage done sums up to several 10.000 Euro.

WEIMAR. This had happened in the history of the city only during the end of World War II. From the morning until the late evening the were fires burning in Weimar. And it happened nearly everywhere. It started at 6:50 a.m. At Erfurter Str., corner of Richard-Strauß-Str. At the time of going to press the number of operations of the fire brigade went up to 15. At noon a second wave occured, and a third one in the afternoon. This continued well into the night. All in all 40 containers went up in flames: in Asbachstraße and Schlossgasse, in Humboldtstraße, Erfurter and Jean-Sibelius-Straße, in Wallendorfer Straße, at Papiergraben and at the Fürnbergschule (Mörikestraße), at Frauenplan, Horn as well as in Washingtonstraße.

Soon a group of culprits was under suspicion. Not only that the arsons happened shortly after the eviction of the squat on former Topf and Sons grounds. Already when the first fires were started witnesses reported that they had seen masked people in black. This was done in a professional way: Using delays they did not even have to leave the scene of the crime in a hurry, that might have raised attention. During the eviction of the squat in Erfurt similar incendiary devices were found.

At noon the head of police, Ralf Kirsten, took an extraordinary measure: Together with mayor Stefan Wolf he went to Gerberstrasse and, without reproaching them concretely, appealed to the users of the alternative Youth Center to use their influence to stop the senceless destruction. 20 minutes later the next container was on fire.

The fire brigade of Weimar had never experienced a day like that. At some point ,more than 50 firefighters were deployed. Besides the professional fire brigade the voluteers of Ehringsdorf, Mitte, Schöndorf and Taubach were alarmed. Police got reinforcements from stand-by units and temporarily from a helicopter.

Solidarity with the squaters and now houseless in Erfurt! Avenge Topf Squat!