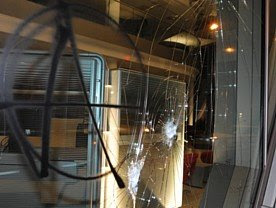 Monday evening a spontaneous demonstration of more than 100 masked participants took to the streets of Berlin-Mitte. This was directed against the repression during the NATO-summit.

Monday evening at around 10:15 p.m. more than 100 persons, masked and dressed in black, marched spontaneously and unregistered from Rosenthaler Platz to Hackescher Markt. During this lots of rocks were thrown, fire crackers exploded and various materials were used to build barricades and block the street. Several cars were damaged as well. In front of the building of SAP an incendiary compound set ablaze. The first police officers arriving had no other choice but to watch the scenery from a distance. Later on the 23rd Ehu (Riot Cops) took charge. They searched in vain for persons in the neighbourhood, as the demo split after a short time into small groups.

A ticker reports as follows:

22:19 Witnesses report 100 people on a spontaneous demonstration to Hackescher Markt, partly masked, with fire crackers.
22:20 First car damaged, police needs to get organized
22:21 First police car on its way
22:22 Cops report the group to be „tremendously on the rampage“
22:23 Meanwhile fout cop cars on the way
22:24 Incendiary compound at the SAP building – burning
22:25 Various Items put on the street Weinmeister Str./Rosenthaler Str.
22:26 Riot Cops reach the area. Following reports: 100 persons in Weinmeisterstr. all of them dressed in black
22:27 Lots of thnings on the street. Cops gather at Rosenthaler Str./Gipsstr., but cannot do anything. At that tim 100 people masked, repeatedly throwing stones, an incendiary compound and creation of hinderances in the street.
22:32 Masked people in Weinmeisterstr. In Rosenthaler Str. a construction fence and, according to unconfirmed reports a newly built hotel building was set on fire- fire brigade is on the way.
22:32 Fire put out – was still small
22:38 Demo disperses in small groups of 10-15 people – Riot cops search the area
22:45 Cops circle around the neighbourhood, searching for people – without any success