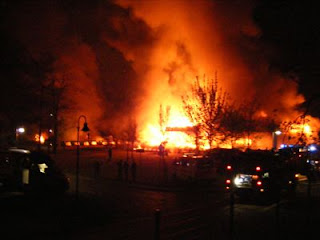 The following communiqué can be found on the internet now:

Swords into ploughshares, tanks into pruning shears!
If youz don`t disarm, we will do it!

Wir living in times of war. The Bundeswehr continously expands their war of aggression in Afghanistan as part of the NATO war alliance. Destroy weapons and military equipment now: Everybody can do it, every reasonable person should even do it. Today – not tomorrow, we cannot wait any longer. Because wars are not prevented with more weapons - neither through socalled „Peacekeeping“. The war technology of the military, the armament companies and the politicians brings deathn and destruction to the people, played down to colleteral damage and professional risk of soldiers. Soldiers and war don`t have a place in this world in more. Their time has come. They do not contribute to any solution but add to the global expansion of misery.

Our experience shows that no situation is inevitable: despite Stasi and ideological blindness. Was was true 20 years ago still is true. The new state as well has nothing to offer to us, apart from the consumption of a promise of freedom, allegedly defended at the Hindukusch. The promotion of officers that took place in the townhall for the first time on 7 October 2009 was the straw that broke the camel's back. We condemn military rituals in public buildings and public places as signs of attachment.
Through politicians who are supposed to serve the citizens, not murderers paid for by the state. We have enough, we do not want to tolerate the deception in the name of democracy and peace any longer. We do not dance to any melody of Wendehälse and Blockflöten (Names given to hypocrits and opportunists of former East Germany rapidly adapting to the new system after the wall came down).

We have to withdraw the material basis of wars. To take steps towards disarmament on one's own responsibility therefore is the need of the moment. In order to render inhuman military equipment useless we simply set it on fire.

The School for Army Officers in Dresden is the core place of training of the Bundeswehr. Since 1998 each year more than 1400 officers and contenders pass through the courses to kill at command. On its terrain exists a simulated command post, courses in tactics, logistics and history are tought: war knwledge. The coat of arms of the officer's school in showing the Iron Cross glorifies „soldiership since 1813 despite all wars and political changes“. „The basic colour symbolizes“ well-fitting „in red the commitment of the professional soldier“ to kill other people „up to self-sacrifice of one's own life“ as a miserable hero.

No more military rituals in front of the Semperoper!
An end to the deployment of Bundeswehr vehicles abroad!
No interior operations of soldiers!
„No paseran“ for belletristic Neonazi troops and their anual march in February!
Never again war – never again fascism!

From the proclamation of the Multicoloured Republic of Neustadt: „Any glorification of war, militarism, fascism and racism is prohibited in the MRN (...)“

In memory of Jorge Gomondai, who died 6 April 1991 at the age of 28, after racist youth threw him out of a tram. 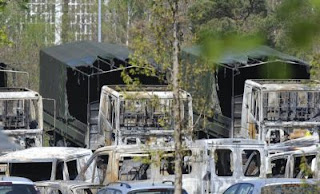 The vehicles of the Bundeswehr burned in Dresden in the night of Easter Monday caused a damege of about 3 million Euro. Culprits unknown forced an entry into the grounds of the army officer's school in Marineallee and put incendiary compounds at three places at a minimum, said Silvaine Reiche, spokesperson of the provincial criminal police of Saxonia. Several Busses, Trucks and cars were set on fire. Additionally the vehicle hangar was severely damaged. A written responsibility claim was not found.

To extinguish the fire the Dresden professional fire brigade deployed 22 fire engines and 64 firefighters. They put out the fire with foam and water. After extinguishing the fire a special vehicle was deployed to measure harmful substances. No increased concentrations were found.