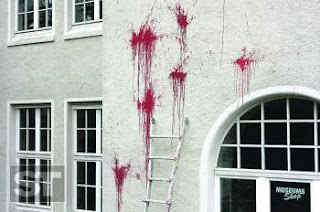 The communiqué we got:

„For not letting the NATO-Festivities pass without comment, we covered the museum Baden in Solingen with red colour today, April 23rd and left behind the slogan „No NATO“. Within the framework of the 60 years celebrations of the NATO this evening in the museum there will be an event taking place called „60 years of NATO – 60 years peace in freedom“. Amongst others minister of the interior and former general lieutenant of the german army Jörg Schönbohm and Bernd Wilz (former permant parliamentary secretary for defence and reserve colonel) will paticipate.

While NATO was celebrating with their generals and heads of state the jubilee of 60 years of war and military dominace of the west on the 3rd and 4th of April, multiple recistance occured despite extreme state repression.

On the NATO summit the escalation course of the alliance was consequently continued. All decisions made point to an intensification of the war course.

Solidarity with those arrested in Strasburg!
No NATO!

AG 'No peace with NATO" 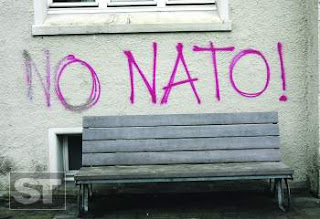