Solidarity demonstration and color attack against a police station 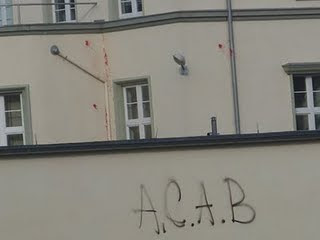 On the 16 of October three comrades have been senteced in Berlin for their alleged membership within the „Militant Group“.
Therefore a solidarity demonstration took place in Burg (Saxony) seeing the participation of about 30 people.
Fireworks have been exploded and slogan shouted while walking through the innercity.
The police did not intervene.

As one could notice, the police station has been attacked as well during the night.
Paintbombs had been thrown and slogans against repression had been painted.

Met are a few – meant are all of us!
Freedom for all political prisoners!