Attacks on the houses of two Hamburg's senators 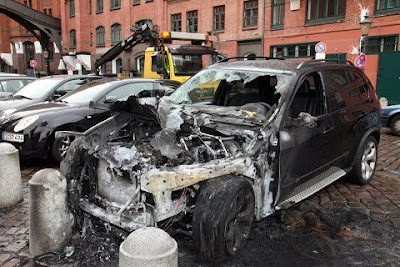 Several authors undertook some attacks against the private houses of the innersenator Ahlhaus and the senator for science Gundelach (both from the CDU party).
Stones and bottles full of color got thrown.
A car got arsoned.
The police could arrest some suspects.

At 3am they began: in Altona one threw bottles with white color against the private house of Ahlhaus. While one team threw the bottles, the other torched a BMW parked in front of the house, which belonged a private company.
At the same time, the senator for science got waken up by stones thrown against the windows of her house. 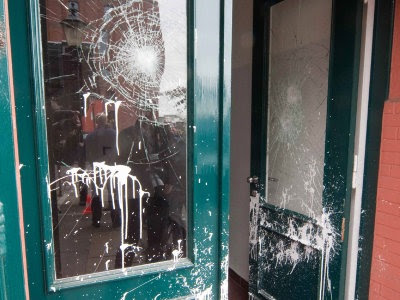 The police arrested two suspects, a 24 years old unemployed person from Hamburg and a 20 years person from Lünenburg, who allegedly have been seen while escaping from the spot.
The police is patrolling much more during these days because of the high number of arson on cars.
They followed the two persons and managed to get hold of them, they found some spraycans in the bag of one of the two persons, also both men had white color on their hands.
They refused any declaration and got left out because the proofs have not been enough for put them in prison.
They are accused of property damaged and arson now.