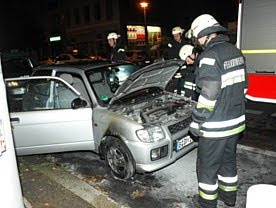 On the early hours of the 13.10.2009 we arsoned a car, a „Daihatsu“, parked in the Köpenickerstr.
The car, which got heavily damaged, was „10 years old“, writes the BZ and the pigs do not believe a political motivation behind the arson.

What a case, that exactly this car, with plate number B:DM 1933 (!) belongs to the girlfriend of Peter Brammann, active in the group „Kameradschaft Spreewacht“ (note: a long term standing neonazi group in Berlin) and singer of the right-wing band „Deutsch Stolz Treue“.
He lives in the Köpenickerstr., in front of the „Youth Hostel“, just a stone-throwing distance from the autonomous center „Köpi“.
It seems as he would feel itself quite good here, at the border with Kreuzberg, where alternartive and antifascist people live in.
It does not bother him, but US yes!

Peter get the fuck out with your girlfriend (who seems to like the BMD, the „Bund of deutscher Mädel“ (note: neonazi organisation for women) and the 1933) to Lichtenberg, move in the bunker of the „Kameradschaft“ and pay attention to your car!

Firy greetings to Leipzig, the coming weekend will be hot!
Let us show the nazis that in autumn not only the leaves fall!