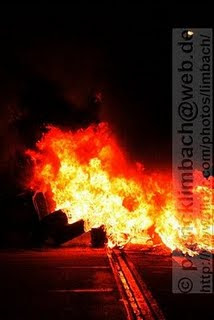 This is a personal report about a solidarity demonstration which took place for the MG (militant group) defendants.

Around 11.15pm 120 people gathered, masked up, in the district of Connewitz in order to show their rage and hate against this repressive police state.
The occasion for this has been the sentence against Axel, Oliver and Florian.

The first part of the demonstration carried the banner reading „we are all part of a terrorist association – solidarity with Axel, Oliver and Florian“ and walked direction Connewitz crossroad, while the second part of the demonstration began to build up barricades and set them alight.
Fireworks have been exploded during the march and people gathered stones for eventual attacks by the cops.

On their way to the crossroad people blocked the streets by using different furniture and slogans like „militant group, the salt in the soup“ have been shouted.

Arrived at the crossroad, several barricades have been built.
As the cops arrived and began to prepare themselves in the sidestreets, they have been immediately attacked, which put them in panic, one of the lost its scanner while escaping.
Seven police cars got damaged.

Cops began to gather again and people kept on building barricades.
At one point the cops were enough to intervene and to bring the district under control again.

During the night the following objects have been targeted and smashed: