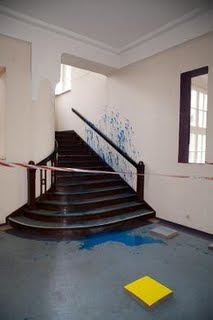 On tuesday afternoon Matthias Gärtner, member of the city parliament for the NPD (neonazi party) should have had a speech at the university.
However, his way to there ended rather in the hospital.
He is one of the most active members in the region and sit in the city parliament.

He is a student of history and politics at the local university.
He wanted to give a speech there about the symbolic of national socialism.
However, as one can read on the newspaper, he got attacked from several antifascists who threw on a him a lot of blue color and sprayed him with pepperspray, then puled him on the ground and beated him up.
The seminar did not take place, nobody got arrested and he had to be transferred to the hospital.

Fight nazis – by all means necessary