Color and stones against the dutch embassy 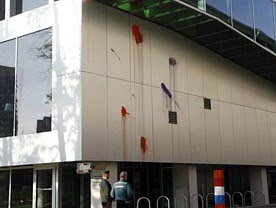 a claim which reached us:

„Solidarity greetings from Berlin to Holland

in the night to saturday we attacked the dutch embassy with stones and color during the ongoing action days in Holland.
We want to show solidarity with the squatters and the activists who struggle in an offensive way against the new laws regarding squatting down there.
The attack of the dutch state against self-organised freespaces is an attack against us all and we won t take it.
Create and defend freespaces – suqat the world!

Shut down the normal capitalist rhythmn!
We stay all!