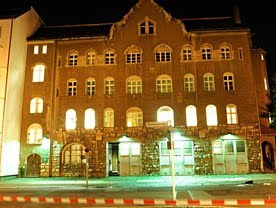 „At first we want to condemn of again innocent passer-byers who just finish in the search-framework – an arrest we read in the press about.
Now follow informations about the attack on the police station in the Rathaustr. in Berlin Lichtenerg in the night from the 13 to the 14 of October:
solidarity knows no borders...

You keep our comrades Masouras, Hadjimichelakis and Yospus prisoners in Athens.
You took Christoph T. And Alexandra R. in general preventive kidnapping, you want to make an example with the prisoners of the first of May, you organised a farce process against alleged members of the MG, therefore we visited you.
In solidarity with all the ones who are on our side of the barricade and take action against your social terror-control ansd your anti-insurrection combating.
A special greeting goes to Alfredo Bonanno and Christos Stratigopoulos, kept in pre-trial detention in Greece. 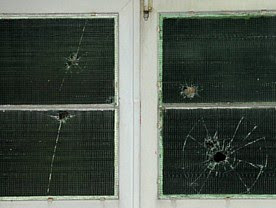 From the press: Unkn own persons attacked a police station in Lichtenberg and created high damages. Nobody got injured.
Clearly the perpretrators acted in solidarity with people who are in prison accused of arsons on cars.
State security investigates.

Around 12.30 the group showed up in front of the police station and smashed several windows with stones, afterwards they lighted smokebombs, their smoke reached the inner part of the building through the damaged windows.
Also they left some calpthrops on the streets which damaged the police cars who wanted to search for the authors, who instead could flee away.
The police first arrested three persons in the area but had to release them quite fast.
Civil cops found a bag in the near of the action containing flyers who had a connection to the ongoing arsons on cars.