Attack on the iranian embassy 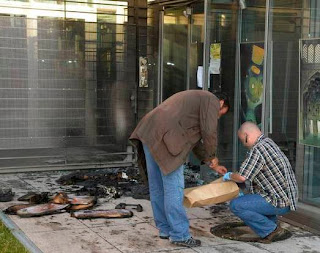 „Down with the clerical fascist system in Iran!

On the night from the 17 to the 18 of June we attacked the iranian embassy in Frankfurt am Main with stones and a burning barricade.
By this, we solidarize us with the comrades in struggle in Iran.

For us, it is clearly not about a support for the „candidate for the reforms“ Mussawi.
He, while he was part of the government in the eighties, let thousands of leftists being put in prison or getting murdered.

The god – state in Iran can not be reformed, but has to be abolished.

Even though a large part of the actual demonstrators aims to reach a bourgeois democracy or support Mussawi, also communists and other leftists take part into the struggle.
Our solidarity goes to the them.

For the global social revolution“