Arson attack against vans of the Ordnungsamt 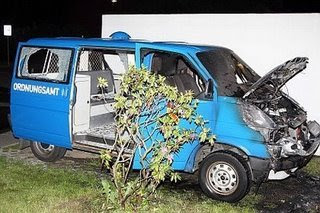 „Repression against the Ordnungsamt Reinickendorf
Berlin during the actionweeks – the city responds to us with a big apparatus of security forces. But the struggle for freespaces is linked not only to lefty niches and we are also not the only ones who undertake social war against the ones in power.
The daily struggle of Berlin against junkies, homeless people, Romas or park's visitors fill us with repulsion. Always involved remains the Ordnungsamt, symbol of a certain authority mania cultivated by the Germans since the nazi times.
Otherwise, how should one explain the hatred towards Romas, no matter if they play music in front of some bars, beg or clean windows, one will always stir up hatred, one will always „take action“.
Like in Görlitzer Park, where also the Ordnungsamt, following an historical continuity, kicked out the „gipsies“. The Ordnungsamt act mostly against the ones who are easy to be displaced from public freespaces: migrant families who are making a barbecue, granmas with their dog, bike riders, all of them should get the fuck out so that Berlin's parks remain clean. Therefore we took the actionweeks as an opportunity for reducing the movement capabilities of Reinickendorf's Ordnungsamt. We arsoned two of their vans in the night to the 19 of June.
Reinickendorf is one of the most repressive districts, together with Spandau and Neukölln, for what concerns life on the streets. We want the freedom of all the ones who have been arrested during the actionweeks, as also for the prisoners of the First of May and all the other ones, who are being kept anywhere against their will!
Dissolve the Ordnungsamt! Autonomen in movement“ 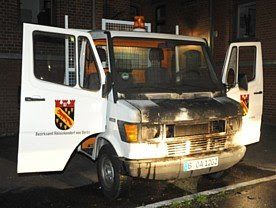