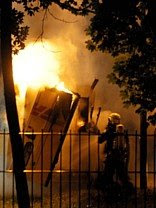 Again unknown perspns torched some vans of the DHL, sister company of the German Post.
The arson got discovered in the early hours of Tuesday in the Gerichtstr., Wedding,.
Nobody got injured.
Already during the last week, seven van of DHL got torched in Tempelhof.
The police suspects a political reason behind the arson.