Spontaneous demonstration and arson after the arrest 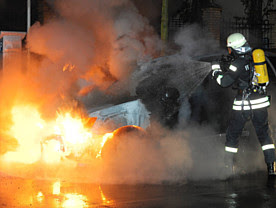 Overthrown trashbins, a burnign car: the rage of the left scene outbursted on tuesday evening in Friedrichshain following the arrest of a suspected arsonist and the upcoming eviction of an houseproject.

A large group of autonomen gathered in the evening, from the original 150 they became 500 (note: 800 actually).
Fireworks have been exploded and bottles got thrown.
After the demonstration got declared as finished, there has been some cat and mouse game with the police.
Several streets have been blocked by masked up person with building material and fireworks have been exploded.
In the night a car got arsoned in Mitte.