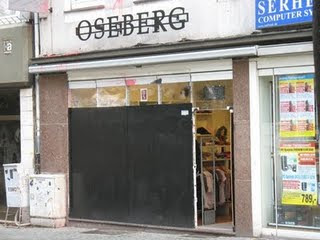 the following claim has been sent us:

Since longer time the neonazi shop Oseberg is present in the inner city of Essen.
It is a meeting point for neonazis and contribute to the fact that their presence became normal in places like the trainstations or the inner city.
This normality has to be broken.
Therefore there have been already several attacks against the shop.
On monday the 23 of November 2009 we entered the shop shortly after it opened up and spraypainted theit items with a fire extinguisher full of red color, making them unsellable.
The actions happened until now marked the shop for the public and through the smashed windows they pushed the price of their insurance towards very high levels.
Our action should bring to the temporary stop of selling their items.
The neonazis do not have to feel safe, no matter if daytime of during the nights.
Autonomousn antifascists – kick the shit out of here!
Alerta Antifascista!“