Color attack against a war memorial 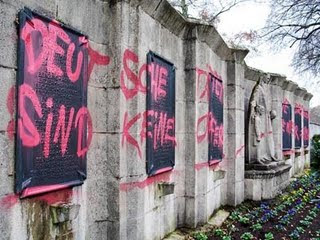 A war memorial got seriously damaged by a color attack probably undertaken by left extremists.
On that day there has been remembrance festivities for the fallen soldiers.
The memorial boards with the names of the dead soldiers of both world wars as also some statue got massively damaged with red color.
Slogans such as „remember the true victim of the wars“, „never again war“, „never agains fascism“ and „german perpretrators are no victims“ has been left behind.
Even the memorial plate and the flowers put in front of it has been damaged.