After a house eviction: burned police car/color against a police station/street blockades. 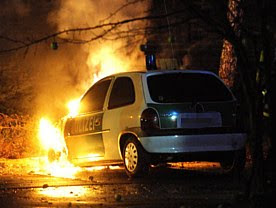 „each eviction has its price

on tuesday the 24 of November 2009 the henchmen of the state, the bailiff and 600 cops, evicted the autonomous houseproject Brunnenstr. 183.
Such attack against a self organised structure is an attack against all who are in conflict with the state and the present situation.
And why such an attack had to take place again?
So that investors can build up the next sterile house in Berlin and the city can become a bit more clean and unfriendly for all the ones, who do not want to go through the world blind like a sheep.

Only a few hours later we flamed a police car in the district of Lichtenberg, in the Hauptstraße, as a first reaction against this attack.
And this won' t be the last one.

In solidarity with Tobias, who is imprisoned, accused to have burned several posh cars.
Actually the cops and the state attorney found again somebody on whom they want to statue an example on, because of the unstoppable arsons not only against posh cars.

Fire and flames for this state and its repression organs!
We stay all!“

in Neukölln unknown people threw paintbombs against a police station and police cars.
In Prenzlauerberg, unknown person blocked a street with a burning barricade.