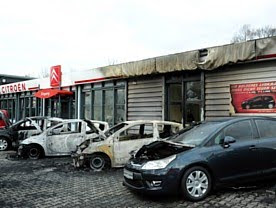 Four cars got arsoned at a Citroen car dealer.
the following claim reached us:

„in the past night to the 24 of November we visited the citroen car dealer in Lichtenberg as a reaction to the sentences against two prisoners of the struggle against the NATO meeting in April in Strasburg, they got 3 and 4 years prison sentences handed.
They have been as example for all the others sentenced in order to prevent collective social struggles for the future.
The state has a lot of fear of revolts with high participation of different people, since they are calculable like normal demonstrations.
Therefore the repressive organs are persecuting people also in Greece – the conspiracy of cells of fire - , in italy – 200 years of prison alltogether for 10 people following the riot in Genoa 2001 – or here as well, especially against youth or other resisting people.
Like the youth who have been imprisoned because of throwing molotow on the first of May or against scholars and students in protest, who oft are targeted particularly heavily, sometime with terrosist accusations.

Freedom for all – for social revolution – freedom borns from a fighting movement!“