Arson attacks against the German Railway 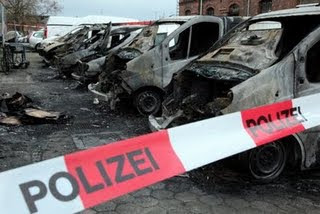 A claim reached us. We are not to translate right now so we will at first tell just about the reasons of the attacks.
Ten cars belonging to the german railway have been torched at the same time during a coordinated action in both cities,

Signed by the „moved autonomen“.