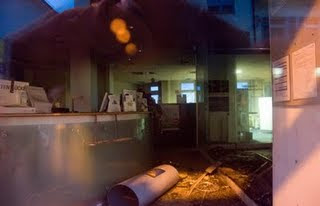 Within 24 hours two arsons attacks have been undertaken against a dresdner bank and a deutsche bank.
In one case the inhabitants of the building above had to leave their apartments because of the smoke development.
All in all there has been over 110.000€ of damages.

In the first case, the authors smashed the windows of the bank and threw a molotow inside, causing 10.000ð€ of damages.
In the second case, several apartments in the attacke building have been damaged as also a butcher.

„Movement light of the morning/Commando Makeda“

One sent a claim via email to a newspaper.
The „Movement light of the morning/Commando Makeda“ took responsability for the first arson, which was directed especially against the Commerzbank, owner of the dresdner bank.
Also the declared the arson as a „little slap in the face for the fraud“ undertaken by the investment advisor of the bank.
About the other attack, the group did not take position.
The police suspect a second group behind it.