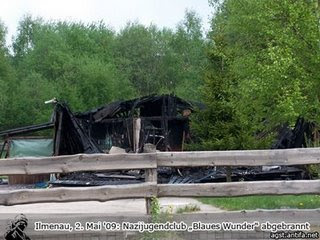 In the night to the 1 of May 2009, the youth club „Blaues Wunder“ burned down.
The fire brigade tried to extinguish the fire but the building burn totally down.
The youth club was a beloved meeting place for neonazis of Ilmenau as for right wing student fraternities.
Two social workers there worked with neonazis, from younger to older ones, hiding behing the acceptable mantel of youth work.
The club was financed for many years through the city, while they strictly forbid any alcohol drinking in the inner city, in order to get rid of the punks, the club's runners never had a problem with neonazis and fraternities hanging around in the place.

In the night to the first of May the club burned.
It is yet unclear if it was ársoned.
The first account of damages is about 50.000€.
Rumours of roaming neonazis have not yet been confirmed, however there is the risk they will hold events during the next couple of days, take care!