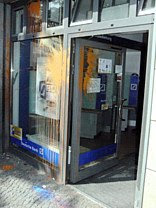 In the night from monday to tuesday, some activists threw several egg full of paint against a few branches of the Deutsche Bank.
By this action they aim to raise attention about the scandalous politic of bank – saving.
The action by the „volunteer examiners of the economy“ prepares to the „bank robbing“ action to be undertake during the upcoming strikes in the education branch of next June.
A person got arrested after the action.

A translation of their claim named „social unrest insted of asocial peace“ will follow... 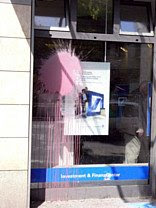