Color attack to the immigration office 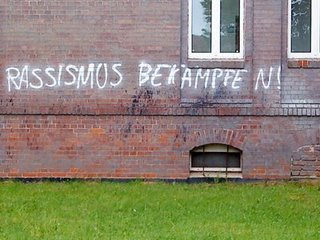 Clearly there has been a color attack during the last few days against the immigration office in Brug.
Red paitnbombs and the slogans „solidarity with Nico“ and „close down the immigration office!“ appeared on the buildoing.
Probably the action is linked to the threten deportation of Nico P., originary from Benin.
Nico, who is married to a transexual person from Berlin, has seen his permission to stay in Germany refused for the last two years and his threaten with deportation, several protest took place for him already.