Land rover and a car of Siemens arsoned 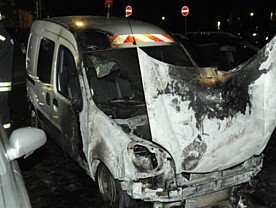 Again arson attacks against cars.
As the police declared, at first a company car burned in Neukölln in the Boddistr.
Two cars parked close got also damaged.
A passer byer notice four persons who were arsoning the vehicle.
Around 4am, three masked up person have been noticed while trying to arson a land rover in the Kastanienallee.
Their attempt did not work and they escaped.
Just four hours before, a demonstration of leftist groups terminated.