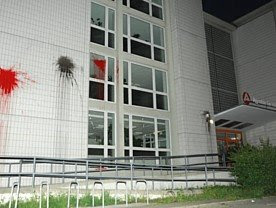 „Stones fly in the air!“

On the 09.06.09 we attacked the jobcenter and the agency for work in Neukölln, the agency for work in Wedding and the jobcenter in Tempelhof with stones and color.
Because when one does not want to loose, one has to resist and at the best together with others.
In France, employees kndnapped their bosses, in order to affirm their interests. In Spain, workers strike militantly.
But also in Germany workers protests and strikes take place.
Sadly, mostly atomized and simbolycally.
But times change and everybody speak about crisis.
The crisis of capitalism, which also in Europe shows – and will show - more and more the inhumanity of the system.
Capitalism produces a system of winners and losers, exploized and oppressed.
More competition towards a life worth to be lived cannot be the answer!
Perhaps the solidal standing together or the social unrest instead.
Workers and unemployed are the two faces of the same coin within the capitalist system, they are close together, they are both prisoners. Through the mean of pressure of the treathening unemployement used against workers, this gets even along with a personal devaluation of unemployed persons.
Worse working conditions, less money and the taking in consideration of harassments are the expression of this.
The agencies for work and the jobcenter offers the mean for administrating the misery.
They represent the hinge between the State and the capitalist logic of exploitation-
We destroy your offices in order to say, stop with the harassments, stop with oppression of people, for a nice life for everybody!
Let us struggle together.
Against State and Capital! For a being together in solidarity and more social unrest!

We salute in solidarity all the participatns to the school and education strike“. 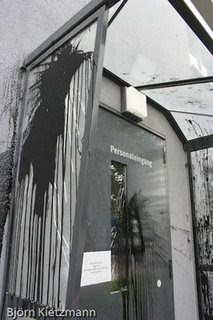