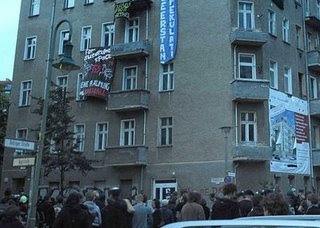 Claim on the house squatting:

During the action days for freespaces in Berlin we squatted since a few hours a house in Berlin – Friedrichshain.
We want to remain in the empty building located in the Voigtstr. corner Dolzigerstr.

Our squatting action is part of a line of actions which are directed towards the keeping of autonomous freespaces and against a restructuring of the city Berlin, oriented exclusively towards the capitalist logic of usability.
Our goal within the action weeks called by the campaign We stay all! From the 6 to the 20 of June is not only the keeping and raise awareness about the already existing freespaces in Berlin, threaten by gentrification, but also to fight for new ones.

Exactly in Friedrichshain is met by the displacement of people with lower incomes, more and more cheap apartments get privatised and transformed into luxury and private ones, left project have to make space.
As best example remains the northern part of Friedrichshain.
Here one transforms the last pieces of land or empty houses into „expensive private apartments“ such like luxury lofts or townhouses.

At the same time, this means that the slogan propagated by the red-red Senate during the last year, calling for keeping payable apartments in the inner city, do not play any role anymore.

While the Senate does not negate such a change of politic even officially, the district-politic of the Greens have sham fights with the Senate, in order to keep for themselves a certain social image.
As example with the process of redefining part of the project of Mediaspree.

We do not need any new luxury or private apartments with „expensive equipements“, but rather living spaces for all with can be selforganised!
We take us such spaces!

Do it yourself - but do it together!

Get active against displacement, commercialization, privatizing and city restructuring!
The houses belong to the ones who live in them!
Free living spaces for everybody!“ 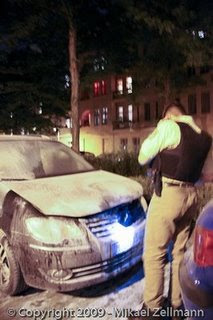 About 40 people of the left scene squatted a house in the Voigtstr.
About 300 more of them remained in front of the building.
There have been scuffles with the police, bottles have been thrown and people arrested.
Only a street fúrther two youths arsoned a car and have been arrested by the cops.
Shortly after the squatting was finished, another car got arsoned in the Bänschstr.
State securtiy investigates.