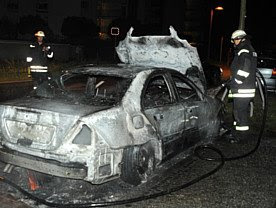 „Again one hosue squatted house got evicted, which got squatted in order to raise attention on the years long emptiness and its clear use as object for speculation.
Instead of giving it to people in this city who would need it, the house rots so that at one point one can make a proficous investment with it.

Our rage against this mutated into resistance and therefore we gave an expensive Mercedes to the flames on the early hours of the 13 of June in the Halbinsel Stralau, a few hours after the eviction.

The action weeks are not yet over – fire and flames for Berlin!
We stay all!

For a life worht to be lived for everybody – without exploitation and oppression!“