Color to the Showroom of the Marthashöfe 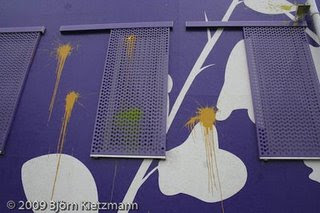 „Why did this happened?
On the 14.6.09 we rendered the Showroom of the Marthashöfe, Berlin, a bit nicer with egg full of color.
We understand this action as part of the „action weeks“ against gentrification and for the keeping of selforganized freespaces, therefore we will keep on attacking and making nicer further luxury projects, with the goal to stop them.
But why did we do this?
We want to try now to explain it:“

note of the translator: here follows a long claim focussing about the project of Marthashöfe, as much as in general against capitalist city restructuring and further luxury projects being built in the city.
As for other long claims, we are going to translate it as soon as we have the capacities for, since at the moment we are a little overwhelmed by the events (which is positive by the way...)