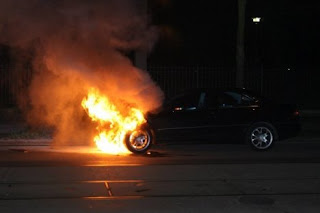 In the night to Friday two upperclass cars were put on fire in Berlin. About 1.20 a.m. two people walking by Eldenaer Strasse saw fire coming out of the engine compartment of a mercedes. It was severely damaged by the flames.

About 20 minutes later an inhabitant of Hornstrasse reaslized a Chrysler burning. A Golf standing next to was also damaged by the heat. In both cases the Berlin Fire Brigades extinguished the flames.

The political police Staatsschutz took over investigations, as a political motive for the arsons can not be excluded. This year already more than 60 cars had been burned in the capitaql, presumably for political reasons.