Direct action in Solidarity with the Comrades in Greece 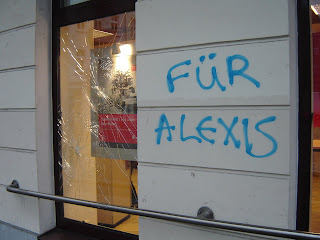 A Declaration sent to us:

"on friday night 2 Sparkasse banks in the friedrichshain neighborhood of berlin were attacked. windows were smashed and slogans were sprayed.

SOLIDARITY WITH ALL THE COMRADES IN GREECE- WE FIGHT ALONGSIDE YOU!

SOLIDARITY WITH THE ARRESTED AND IMPRISONED IN GREECE!

FOR THE ESCALATION OF WORLDWIDE INSURRECTION! FÜR ALEXIS 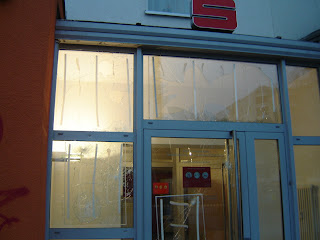 Beside this, the cops and newspapers report that one of the bank has been it with a molotow cocktail. In kreuzberg, some masked up people burned some trashbins while later on in the night a Porsche got torched in Friedrichshain.

A demonstration of about 1500 people walked early in the night through the district of Kreuzberg against state repression and in solidarity with the MG-defendants and the greek insurrection.