Color attack against the french consulate 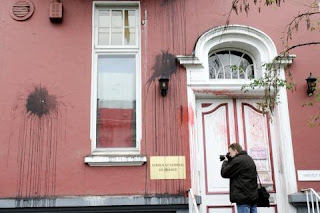 Unknown persons undertook a color attack against the french consulate, hitted with six paintbombs.
Following the investigations, one believes the fact happened between 3.19 am and 4.14 am. Nobody got arrested.
The police believes a connection between the attack and the Castor transport.
In France some persons sabotaged the trainlines, some got arrested. Clearly, autonomen from Hamburg wanted to solidarize with them by undertaking such attack. Among other things, the arson attacks against Vattenfall cars happened in Hamburg during the Castor protest are not yet clarified. As reported, different cars got burned in different part of the city on the beginning of November.
Later on, some Castor opponents took responsability through a letter.
The most heavy of these attacks has been against a car containing a gas bottle which made the cars exploding, dammaging the windows of an house and several other cars.