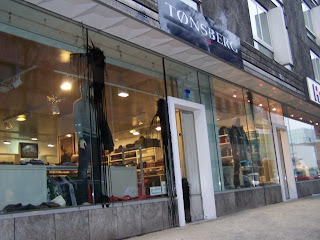 Joy for all at christmas time?

For sure noit for the fashists running the Tonsberg shop in Nürnberg. The mo0re so for Antifas. On Wednesday morning the facade of the Thor Steinar trademark shop really didn look good.

Eight big black splodges were spread all over windows, walls and entrance. It was bitumen, which is extremely hard to clean away.

The whole Saturday a cleaning company was occupied getting rid of it. Threy even needed to go back and get special equipment. A communique explains the attack: Protest against fashist shops like Töndberg is useful and important. But we think that this is not enough.One also have to make live harder for fashists - also financially - by direct actions. Fashist shops do not pay. As it is hard and time consuming to get rid of nazi structures through the courts, we calls for adressing the problem in a militant way as well." The4 activists continue: "Even though some cop cars were patroulling the area, it was possible to act in a quiet minute. We must not allow them to intimidate us."

Although this action builds the climax of direct acticism so far, all the smaller actions that took place should not be forgotten. Varoious companies (from PC-Dokto to Dixie-Toilets) tried in vain to get their delievries to the Nazis. Another time the window got spray painted with "Nazis raus", unfortunately cleaned way too quickly. Again and again the shop was used to depisit ugly waste and make use of the pub lic toilet in the entrance. The window repe4atedly was sprayed with diverse stuff. This list might well be incomplete and waits to be added to. Hey ho, let's go: to the demo on Saturday (redside.antifa.net) and into a 2009 determined by struggle, hopefully without Tonsberg soon...