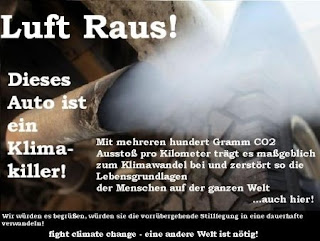 This night the action Air gone! started to flatten the tyres of luxury cars as a contribution to the climate action day to paralyse climate killers.

While the climate alliance calls for promotion parodies against the greenwashing of the companies, radical climate activists went a bit further that night.

In different cities the tyres of expensive jeeps and sports cars were ventilated. Aim of the action is not only carbon expulsion, but also to put on the agenda the social and global injustices connected to climate change, the group calling for the action explained. The biggest amount of emissions are caused by the industrial states - and, as it is made more than

clear by the example of luxury cars, it is mainly the rich here as well - while the countries in the South are most affected already by the effects of climate change.

Flyers were left at the cars explaining the actiond and demanding from the owners to immidiately shut them down permanently.

Similar actions happened a year ago in Berlin and aroused a lot of public attention. This year the newspaper taz reported about the call to the action.

Meanwhile the world climate summit discussed about a follow-up of the Kyoto Protocol in Poznan (Conference of the partied COP 14), producing nothing but hot air, as a lot of climate activists think. Background info and statements from a semi-critical NGO perspective on wir-klimaretter.de. For the following summit in December 2009 an international mobilization was already started by the radical leftb from Denmark (Ungdomshuset-Scene) as well as b y sozial movements from the global south like Via Campesina