Despite (or because?) the antifascist demontration was banned, around 1500 protesters came to Berlin-Lichtenberg to make their position against the Nazis clear. About 800 paople were at the meeting points near the fascist route already by 11 o'clock, while first attempts to block the route already started. When about 150 antifascists arrived around 10 a.m. by metro they tried to block the station. The federal police reacted quite brutal already at that point in time, beating the people with batons and pushing them out of the station to the south. Some people got hurt. Near the East Berlin Zoo the cops tried to dissolve bigger assemblies of people by banning them from the place (Platzverweis), but finally failed when the first 100 people pushed to the street at about 11.30, pulling material to the street as well.

When the fascists came near, the police threatened to get rid of those blocking "by the use of simple physical violence". But they were not irritated by that and claimed "we have a right to block the Nazis".

while the fascists had to wait at the zoo, the cops started to brutally clear away the blockade, which turned out to be way more difficult than they expected. Some people got arrested. Alraedy at that time barricades at Sewanstrasse were build and partially set on fire. The police also reported attacks on their vehicles. 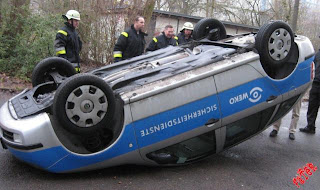 It can be stated that the Weitlingkiez (usually claimed by the fascists to be their territory) was by then an Antifa area, and remained to be so for quite a while. The next barricade was buils soon at Sewnstrasse/Volkradstrasse, where 600 people stepped into the way of the fascists. Again the police tried in vain to intimidate people, threatening to use violence and water cannons. In vain. They remained on the street with district major Christina Emmrich (Linke) standing in the first row. After an hour she and the rest of this part of the blockade was pushed off the street and arrested. 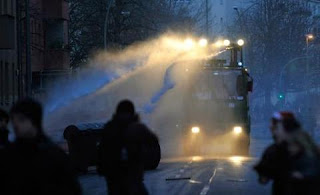 Again Berlin police escalated the situation with the effect that they now completely lost control. When the Antifas resisted the police, they deployed water cannons against them. Barricades were build, but the people were chased back to Weitlingstrasse by the water cannons. Now people stormed into the area from the north, building barricades and setting them on fire to get rid of the watere cannons following them.

At that time the police decided to shorten the march of the fascists and lead them another route. The plan was to just savely escort the fascists to the next train station. This also failed: Bigger groups of Antifas manege to get close to the fascist march and attack them with all kinds of projectiles. The police was only able after a while to gather their troops and seperate the Antifas from the fashists near the zoo. This is where the fascist held their last speeches that day. About 20 minutes before an antifascist demo started from the train station, passing the fascist bar "Jaegerheim" that had been targeted several times that day with bricks and bottles.