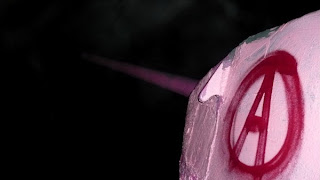 In the "Natural-spacial central unit D29 Wendland and Altmark (Colbit7z-Letzinger Heide), between Magdeburg and Stendal, these days one of the biggest military training grounds of Europe is emerging. Since 1943 the biggest limetree forest of Germany is used by the military. Still today the biggest areal in this country that is not in agricultural use is a military training ground (or, as the camouflage killers name it: TrübPl). Every day tanks and other military vehicles drive through this natural space and destroy it. Maybe the tank memorial (52âˆž21'9.67"N 11âˆž31'25.19"E) was put there to remind people of the constant destruction of nature inflicted by the military? To show to civilians accidentrally walking by that the military is not welcome anymore? Or maybe not...

Some antimilitarists from the region discovered this socalled memorial on one of their Monday hiking tours on a Tuesday. For moral and aesthetical reason they felt the urgent need to act! At 1.35 a.m. the painters started to give a new face to the tank. You may guess... t6he colour of the hour: PINK - After 2678 seconds the memorial radiated through the night in bright pink. Now the peace activists entered part II of their transformation measure and add some details: For example two slogans were placed there: