Paintbombs against the greek consulate 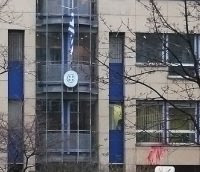 There has been a color attack against the greek consulate in Stuttgart, probably in relation to the murder of Alexis by the cops.

We received the following declaration:
„Out of anger for the murder on the greek 15 years old anarchist Alexis, shot by the pigs, we made a symbolic attack against the greek consulate in Stuttgart in the night from the 11 to the 12 of December.
Alexis is not the only victim of state repression in Greece or in other countries. This stays only for a extreme example of repression against the local movement there, which fights against capitalism and its increasing aggressivity: also in Germany one responds to protests with repression and often people fall as victims of the Justice and the State; like the case of Oury Jalloh, an african refugee, burned down by german cops on the 7 of January 2005. This week bith cops got acquitted.
We solidarize us with the detaines in Greece, with the political prisoners who undertook a protest hungerstrike against the murder and with all the ones who are resisting in Greece and elsewhere!
Freedom grows out of a fighting movement – towards a wider State-carving!
No justice, no peace – fight the police!
Fight the class Justice – for communism!“