Van of the company Kötter and a mercedes arsoned 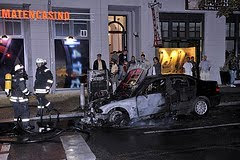 We received the following claim:

„Opel combo in mitte and a car in moabit

on the 3.9.09 we torched a van of the company Kötter in mitte and the following night an expensive car in moabit. Kötter has been the first company which offered his work in prisons – in büren - , and they are earning from all possible sectors in the newly opened prison in burg.
employement and formation of prisoners
working activities in prison
work theraphy
working and scholar formation
infrastructural work
cleaning of the buildings
external care
waste disposal
looking after and supply
catering
medical supply
social assistence
psycological assistence
consultation service
organization of sport activities and free time
tv and radio rental service
room service and equipement of the prisoners
central emergency service
post service
telephone service
writing service
general administration
management of telecommunication system

on their website they proposed a few solutions for the improvement of prisons. Instead, we have our own one: abolish this system, attack its profiteers and participants. This means also for the state attorney ralph knispel, bringing forward the trial against yunus and rigo in relation to the first of may events, even the lawyers described him as bashful, we wish him to finish as the commisar uwe lieschied in the hasenheide. Enflamed greetings to moabit and a lot of power to yunus and rigo, cops are liars and murders, do not let yourselves be harassed by them.

note: the van got torched in the afternoon. Yunus and Rigo are currently under trial accused of having throwing molotow cocktails against the police during the confrontation happened on last first of many, they are under trial for attempted murder.