Arson on a pavillon for selling houses in construction 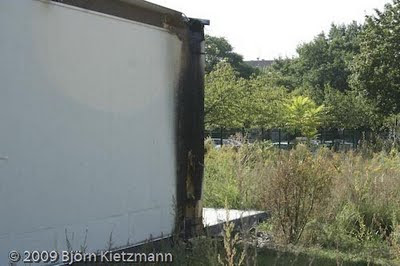 „in the night of the 22nd of September, shortly before the beginning of the construction of the „Prenzlauer Bogens“ we attacked their pavillon for the selling of the properties with a molotow.
The „Prenzlauer Bogens“ is the second big project by the enterprise „Prenzlauer Gärten“, which reached the top story in Berlin by building the first socalled „gated community“.
The principle is easy: new enriched yuppies buy luxurious penthouse or townhouses located in a artificially builded idyllic spot in the middle of the city.
In order to protect their properties from not wanted guests and against anything considered as possible trouble, fences and walls are getting erected all around and private securities patrol the area.
Also this second project comes out of this very idea.
Indeed a private park will be build within the project, so that the yuppies can stay among themselves.

We scorn such methods aimed to exclude people with lower income and to privatize the public space, the follows of which are clear: the rents get higher and the cops take care of security and order, as it is in capitalism.
In fact the luxus of the one means the fear for existence, the precarity of the living situation and of work condition, forced movings and unemployement for the other.
Our answer against this is the fire of rebellion.